Evening Stardusters!  So - it's another late post from me - considering it's only my 3rd post, and once again it's about a week after the event, I guess this is going to become the norm! I know you guys won't mind though >:o)

Well, this time last week I was recovering from a marathon bake.  Baking until 3am on Thursday night, then icing from 10am - 4pm on Friday, boxing up 200 cupcakes and all the crap, sorry, 'stuff' that I needed, we headed on down to Ms Stardust's school for their annual 'Summer Fun Night' - an outdoor fair in the school grounds.

Now last year, it was my first fair, glorious weather, I made 120 cuppies and sold out in an hour.  So I was feeling pretty confident.  Cockiness, and the great British summer was set to defy me.  When we got there, I noticed that we were right next to another stall selling cakes.  Eeeeeikkk.  And they had a gazebo.  *Envy* ... mixed with a little self-doubt and trepidation.  Then, when we were setting up the wind picked up and the heavens opened.  Oh, joy!  Cue us frantically throwing the spare tablecloth over the boxes of cakes, and standing huddled under an umbrella.  I actually contemplated doing a rain dance.  Mr Stardust shot home and brought down the massive garden umbrella.  I don't mind telling you that at this point I was panicking - contemplating what the hell I was going to do if I had to take 193  (yes - 6 sold the minute we got there, and my lovely friend and helper Mrs G 'had' to quality control one of my new flavours!) cakes home.  Luckily, I had Mrs G on hand who mentally gave me a slap round the chops and told me to snap out of it.  Thanks honey :)

So, the rain stopped, but the wind kept on ... well, being windy.  The sun even tried to make an occasional appearance.  I said 'occasional'.  :)  A change in display tactics was required to prevent a buttercream mess!  Low level stands and plenty of re-stocking was the plan.  We were ready! And so the fair opened ..... 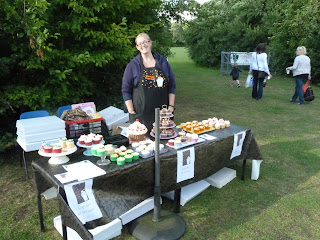 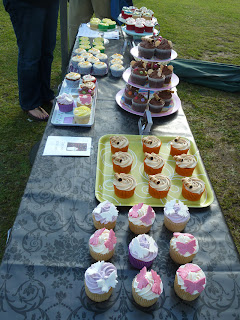 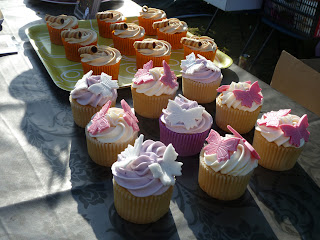 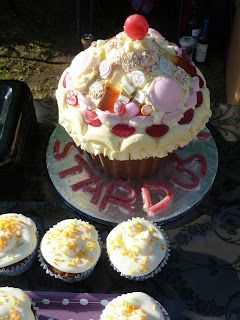 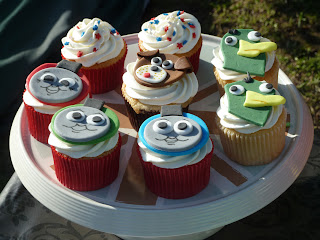 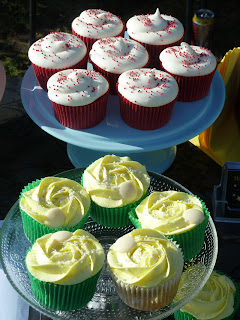 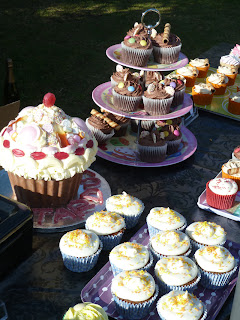 By the way take a look at the amazing GIANT cupcake that Mrs G make for us!  I lost count of the amount of times we heard the question "is it real".  Yes, it is.  And covered in sweets, and popping candy.  Nom nom nom! :)

In the end, Stardust did OK.  Better than expected.  Phew!  It was soooooooooooo lovely to see some of my regular customers buying cakes, and to watch kids face plant into my cakes is an absolute joy.  I wish I'd have taken my 'proper' camera down to capture that.  You can't get a better advert.  But one of my best moments was when someone came over and said "I've just seen someone with a really red cake - can I have one please?"  Awesome >:o)

At the end of the event, I had about 70 lonely cakes left over.  Luckily we were off out on Sat evening and could take most of them with us to that event.  In general, I kind of wish I hadn't baked so many cakes, and have gone with my instinctive thought to also do my infamous lemon curd, and new favourite - American style cookies.  Oh well, you live and learn, and from what I saw and heard, everyone loved their cakes so mission accomplished!

Posted by Stardust Cupcakes at 17:11 No comments: